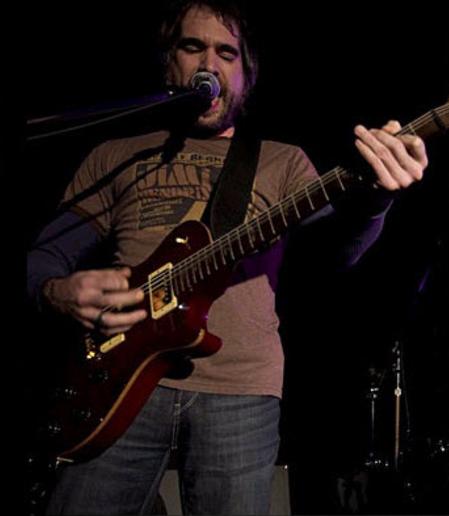 Irwin Thomas was born in Roosevelt Hospital in Manhattan, NYC. His father was Jack Goode, a celebrated star of Movies and Broadway who appeared in films with such Hollywood royalty as Fred Astaire, Ginger Rogers and Cary Grant. His mother was a free spirited, folk singing, songwriting Broadway dancer and between the two of them created in Irwin his musical foundation. A prodigious child, Irwin was recorded at two years old singing his own compositions into the family tape recorder. At five he was playing music on drums and ukulele. After the sudden death of his father, Irwin’s mother decided to start a new life for her and the ten year old in Australia and they moved to the countryside in Rural Victoria. Irwin took up guitar and practiced with obsessive fervor and dedication.

By fourteen he had become so accomplished that he was playing in five different bands with musicians twice his age. He quickly absorbed a wide variety of styles during this apprenticeship ranging from R&B to Rock, Latin to Punk. At fourteen, Irwin met legendary guitar player/producer Carlos Rios (Gino Vannelli/Brother to Brother) whilst on tour in Australia. Carlos gave the fourteen year old his phone number, address and told him if he was ever in the Los Angeles area to give him a call. Six months later a rather surprised Carlos received a phone call from that very same kid. He had arrived in L.A. Irwin then sat in on a session for an album that Carlos was producing for Latino Actor/Singer Ruben Blades. That night he met the likes of Larry Klein and Al Schmitt. During his time there he witnessed the seedy L.A. rock scene first hand. From downtown to the strip he would crash on friends’ couches and sneak into the famous Rainbow theatre at every opportunity.

His education continued. On his return to Australia Irwin announced that music was his life, so he left school and moved to Melbourne, determined to make it as a professional musician. Working as a session guitarist he assumed the moniker-: Jack Jones. Jack after his father and Jones because of his Mothers remarriage. His talents as a “guitar-for-hire” were much in demand, but his singing debut came by accident. The now world-renowned freak drummer Virgil Donati, whose band The State was gaining a reputation on the live circuit, was involved in a Van Halen cover band side project called Hans Valen. Virgil asked Irwin to sing and play guitar. Irwin, being unsure of his voice, didn’t feel like he could do the songs justice so just played guitar instead. One day, just before a gig the vocalist got sick, so Irwin stepped in and sang. The room went quiet as people stared in disbelief that this incredible voice had come from Irwin. He had impressed everyone…so much so that he was asked to join The State as singer/guitar player. The State became Southern Sons and over the next six years would go on to sell close to 1,000,000 units throughout Australia, Asia, Germany and Canada.

Irwin’s time with Southern Sons served as a solid foundation for a life in the music business. He toured the country over and over. Honing his chops and getting used to playing in front of large audiences was a crucial part of his development. He was somewhat awkward with the fame and knew artistically it was not really what he wanted to do. He needed to explore his own musical identity. His skills were still in demand as a session player and during this time he toured with many of Australia’s best selling artists. You gotta eat, right?

Then in the mid 90s Irwin found himself back in the U.S. with Dweezil & Ahmet Zappa in their band Z. Dweezil and Irwin had previously become fast friends after meeting in Sydney, Australia in 1990. Irwin was invited to come and live with the Zappas in L.A., and he was welcomed into the family. He stayed there for eighteen months, and it is in this environment of creativity that Irwin knew that he had to make the leap to being a solo artist.

In 2000, Mudhead was released independently. A collaboration between Irwin and Garry Gary Beers of INXS, this was Irwin’s first taste of musical freedom. Later, working with his long time writing partner Rusty Brown, work on a purely solo album began. This culminated in 2002 with the release of the first fully-fledged Irwin Thomas album: The Evolution of Irwin Thomas - a rich and beautiful collection of musical soundscapes. This album’s supporting live shows were spectacular, and Irwin was invited to join Matchbox 20 as support during their tour of Australia. The album received much critical acclaim and is a buried treasure waiting to be discovered by a wider audience.

Irwin’s newest album is tentatively called Made In China and has been written, recorded, produced, mixed and mastered totally independently. It was conceived in 2005 while Irwin was on a UK/ European tour. During a break in the tour there was an opportunity for Rusty to spend some time in London with Irwin to write new material, and within three weeks of hard work they had written the bulk of the album. Made In China showcases Irwin’s outstanding songwriting, dazzling guitar work and his amazing voice.